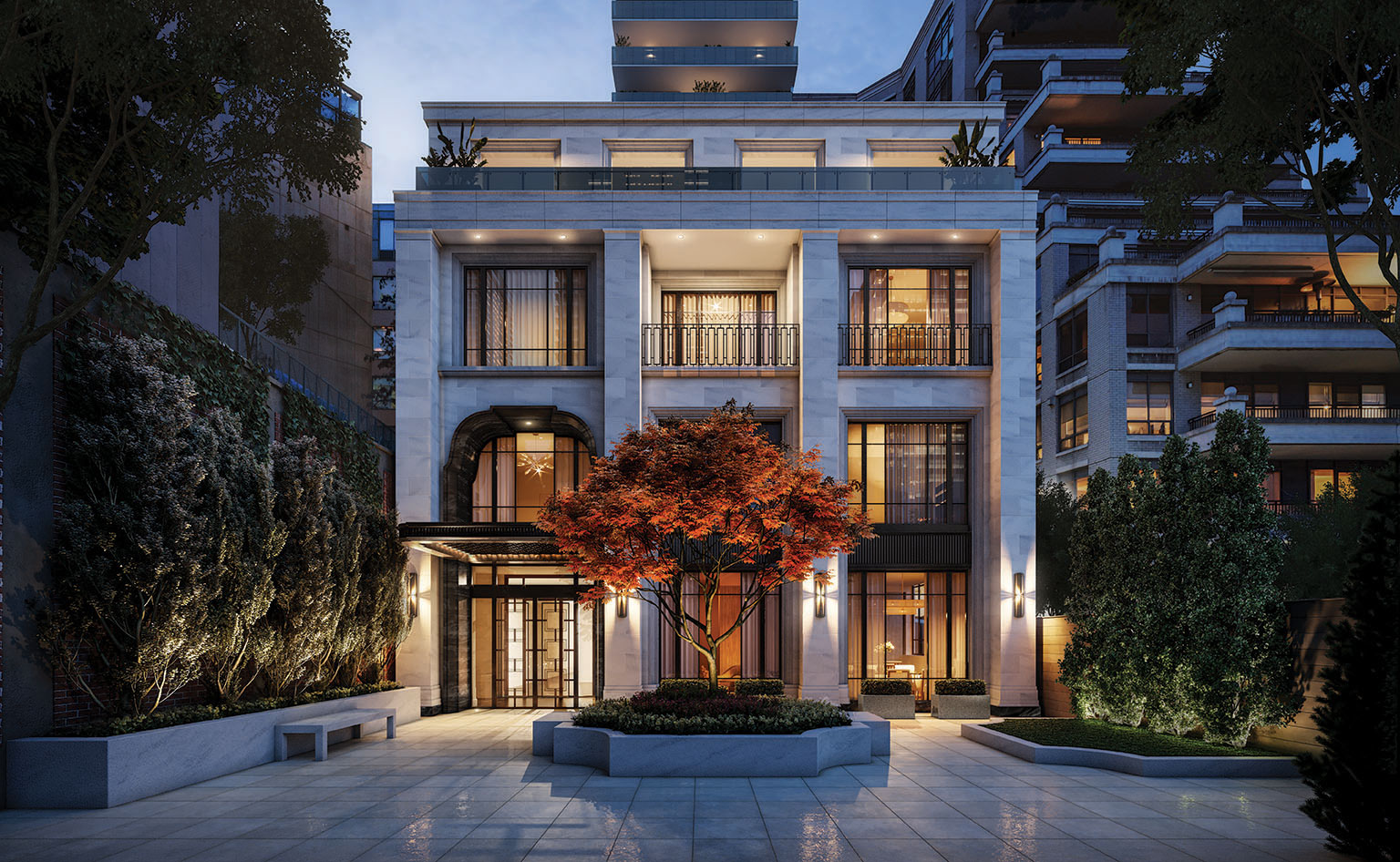 TORONTO’S ICONIC YORKVILLE IS UNDERGOING A ‘REBIRTH OF COOL’

Yorkville is evolving in exciting new ways. The Yonge Street and Bloor Street intersection is seeing the rise of tall luxury towers and, as one goes further east and to the west, the luxury condo buildings are more boutique in style, such as Armour Heights Developments’ 89 Avenue Yorkville, above, blending in with the surrounding area and attracting a new generation of buyers.

For Jared Menkes, the demographic shift in the Toronto neighbourhood of Yorkville to something younger and livelier started around the time the new Four Seasons Hotel and Private Residences opened at Bay Street and Yorkville Avenue in 2012.

Menkes developed that property, along with Lifetime Developments, and the company is now developing Adagio Condos, a new 29-storey luxury condo tower to be located just east of Yonge Street and north of Bloor Street off Asquith Avenue. Adagio’s tower is sleek and modern and its base will be a repurposed, century-old heritage structure.

Menkes grew up in Toronto, and remembers hearing about Yorkville as a cool, hip place where university kids and the indie crowd used to hang out in a cluster of clubs and coffee shops. The neighbourhood was a haven for beatniks and hippies, where musical icons such as Gordon Lightfoot and Joni Mitchell used to perform.

Then Yorkville shifted toward a pre-eminent luxury centre that became home to posh hotels and luxury retail, Victorian homes and the centre of the Toronto International Film Festival.

But that’s now changing as well, as a group of shiny, new luxury condo towers and hotels rise up. A block south of where Adagio will be located sits The One, by Mizrahi Developments, which is currently rising up on the southwest side of the Yonge and Bloor street intersection, across the street from Great Gulf’s One Bloor on the southeast side. A new W Hotel is planned for the intersection, as is a new Andaz Hotel, which is going to be part of Mizrahi’s The One mixed-used development.

“We brought the Four Seasons from Avenue Road to their current location on Yorkville Avenue, between Bay Street and Yonge Street,” Menkes says. “What that has done is brought this whole energy and new development to the east side of Bay Street. We see this rebirth of prominent streets in there, like Scollard Street, with more cool boutiques. You are seeing this rebirth of cool.”

The neighbourhood’s boundaries have traditionally been considered to be roughly Bloor Street to the south, Davenport Road to the north, Yonge Street to the east, and Avenue Road to the west. Along Bloor sits one of Canada’s most exclusive and expensive shopping districts.

When you talk to people from Toronto City Hall, they will tell you that the Yorkville of today has no defined boundary. The city’s existing area-specific planning policy for the Bloor-Yorkville/North Midtown Area (known as Site and Area Specific Policy 211 or SASP 211) shows a broader mix of districts, stretching east to Sherbourne Street, south of Rosedale Valley Road, the CP Railway corridor to the north, and south to Charles Street. That boundary is consistent with the Bloor-Yorkville Business Improvement Area (BIA).

But city staff are currently studying the Bloor-Yorkville area and will be drafting a new secondary plan to build on policy direction in the SASP, as well as work in new policies, frameworks and guidelines, including the recently approved Downtown Plan. The findings of a recent Heritage Cultural Resource Assessment for the Bloor-Yorkville area will also be included in the secondary plan. That draft is due for presentation to Toronto and East York Community Council in early 2022.

We are also seeing a growing interest in boutique, bespoke low-rise condominiums with fewer floors and larger spaces for those interested in lower-density buildings. Many of the new condominiums are now offered at prices starting from $8-million. Yorkville is truly one of Toronto’s flagship luxury neighbourhoods that will continue to see rapid evolution in the years ahead.

Oren Tamir, manager community planning for Toronto and East York District, says that, over the past decade, development interest has been focused around the Yorkville east of Bay Street area.

“The development industry, planning staff and community stakeholders worked together to develop this plan and we’ve been successful achieving and exceeding many of our new open space objectives,” he says. “Moving forward, I foresee continued interest along the Bloor Street, Davenport/Church and Yonge Street corridors.”

The city’s Planning Framework for the area calls to further build on the vibrancy of the area, with very tall buildings such as the 85-storey The One massed at the Yonge and Bloor street intersection. Building heights then “step down” or descend into lower-rise developments the further out you go, consistent with existing two- and three-storey houses in tree-lined streets there and optimizing pedestrian areas, parks and walkways and views of the sky. Development is meant to be compatible with heritage buildings in the neighbourhood.

Menkes points to smaller, more affordable luxury buildings in Yorkville as one of the catalysts of the changing vibe, as well as more community events, such as exotic car shows and Toronto Fashion Week, on top of the shopping district, which help make younger people feel like they are in the middle of the action.

“There are new buildings that can accommodate people who don’t want to spend $2-million to $3-million,” he says. Menkes says their objective with Adagio is a smaller scale, more boutique luxury condo for end users who want to live in Yorkville and take advantage of all it has to offer in terms of lifestyle, as opposed to renting out their units.

Brokers in the luxury real estate space see the evolution in Yorkville as well.

“There are more younger buyers than before. Yorkville is becoming trendier with luxury hotels like the Four Seasons and a newly built Park Hyatt, and a Morton’s [The] Steakhouse facing Prince Arthur Avenue, among other high-end shops and restaurants. [The neighbourhood] is being transformed, replacing historical buildings,” says Tammy Masoumi, from Sotheby’s International Realty of Canada, who has more than 20 years of experience working in the luxury real estate market in Yorkville.

Justin Cohen, vice-president and broker for Re/Max Realtron Barry Cohen Homes Inc., says he is seeing strong demand for condos after a brief softening of the market.

“I would agree [Yorkville] is younger,” he says. “I have been selling condos to younger families with a couple of kids that would normally be going into a house. Now they are looking at the condo market being more affordable, plus they get the lifestyle with it, versus buying on the outskirts of the city. They would rather be living in a smaller space, not worrying about maintenance, because they have stuff to do.”

“We are also seeing a growing interest in boutique, bespoke low-rise condominiums with fewer floors and larger spaces for those interested in lower-density buildings,” he says. “Many of the new condominiums are now offered at prices starting from $8-million. Yorkville is truly one of Toronto’s flagship luxury neighbourhoods that will continue to see rapid evolution in the years ahead.”

For Menkes, the continuing evolution of Yorkville will be one of the great luxury real estate stories to watch over the next decade.

“We are going to be integrating the base of the [Adagio] building and, across the street from Cumberland Street to Yorkville Avenue, the whole west side, all these old builds are being reintegrated,” he says.

“So, you will have these cool, ground-related historic elements. You haven’t seen that at Yonge and Bloor, which is such a bustling neighbourhood on two subway lines. You’ll have this unique feeling that you are walking along a side street but you are at Yonge and Bloor.

“You will continue to see a more livable, walkable neighbourhood that will transition from Yorkville into a Rosedale/Bloor street vibe,” Menkes says.